“War brides” is a term popularized during the Second World War.  Now often applied to women anywhere who, on their home soil, married foreign servicemen posted or temporarily nearby during war or military occupation, and then emigrated to join their husbands in the men’s native land, sometimes with children in tow.

In World Wars 1 and 2, men on their way to the front, returning to England for treatment or recuperation following injury or illness, or on furlough (leave), spent time in Britain. Local social events and dances, sometimes arranged to thank the foreign soldiers for their efforts, as well as casual encounters and work contacts, ensured that Canadian servicemen, stationed or visiting, met young women all over the country.  Due to their age, awareness of the dangers of war, and fact that the majority were away from home for the first time, many fell in love.  Some were whirlwind romances; others knew each other for one, two, or even three years before marrying.  However, before being wed, servicemen had first to get permission from their commanding officer.  In theory, if under the age of majority – then 21 – they also needed parents’ approval, which sometimes wasn’t given.  While the course of true love, according to Shakespeare, never did run smooth, it did lead to the Lower Saint Lawrence area for at least six young couples who came to live or summer in or near Metis!

No official count was taken of women who married Canadian soldiers in or following the First World War, however, it’s estimated that 54,000 wives and dependants joined or followed demobilizing troops returning to Canada.

In World War 2, hundreds of thousands of Canadian servicemen were stationed in Britain – some for the majority of the war – in fact, more than Allied Forces members from any other country.  The Canadian government knew Canadian servicemen were marrying British women from different parts of the United Kingdom and to a lesser extent from countries in continental Europe.

The Canadian Wives’ Bureau in London

As the number of young brides of Canadian servicemen grew, the Canadian government set up the Canadian Wives’ Bureau.  The Bureau helped spouses of Canadian servicemen and their children, and made arrangements for those who wished to eventually join their husbands in Canada, helping war brides to apply to migrate.  First located in the centre of London on Regent Street, the Wives’ Bureau also tried to help with the wives’ transition from the ‘old’ country to their new home.  It fostered the formation of Canadian Wives’ Clubs, published information on living in Canada, and even provided a Canadian cookbook (it wasn’t until decades after the end of the Second World War that peanut butter and maple syrup – basic staples for many Canadians – could easily be found in British stores).

Once victory in the war seemed at long last likely, the Canadian government began planning to bring these women and children to Canada from Britain and Europe.  The Department of National Defence, the Immigration Branch, the Canadian Red Cross Society, and other organizations worked together to make this happen.  Ocean and rail travel costs were paid for by the Canadian government.  By 1946, an estimated 48,000 marriages between Canadian servicemen and civilian women overseas had been registered, as well as the birth of 22,000 children from the unions.  Of these, the Canadian government arranged transport for approximately 44,000 wives and 21,000 children to Canada.  The majority of war brides married to Canadian soldiers were of British origin, with an estimated 44,886 British wives and 21,358 children born to them by the end of December 1946.  About 1,885 war brides were from Holland and an estimated 650 were Belgian.  The greatest proportion of wives (about 80%) married – and children (85.5%) were fathered by – army servicemen, as compared to those from the navy and air force, who naturally were away more than they were present.

Like many immigrants, most war brides’ first foot on Canadian soil was at Pier 21 in Halifax.  Just as Red Cross volunteers attended to the needs of soldiers on the way to fight, Red Cross helpers, now with Salvation Army volunteers, warmly welcomed the new Canadians, offering food, clothes and more for the children who sometimes accompanied the wives.  Most then boarded special trains that took them across the country to their varied final destinations. Many of the war brides were not prepared for the very different conditions – from weather to much more – that they found in Canada.  While some returned to the land of their birth, most adjusted to their new way of life and remained.  From 1928 to 1971, over a million immigrants, whether wartime evacuees, troops, war brides and their children, or refugees passed through Pier 21 .  Now a designated National Historic Site, today it houses an exhibition on the pier’s role in seeing off military men and women overseas, later welcoming them home, and warmly receiving their brides, children, and other new Canadians to their new country.  Visitors to the Veterans’ Deck at the pier can still look out across the mouth of the Halifax harbour to spot where large cables, making up nets, were strung every evening during the Second World War to prevent enemy submarines from entering.

And yes, there were some Metis War Brides!


Alice Sharples Baldwin, in her book “Metis – Wee Scotland of the Gaspé”, wrote about the Metis lads who fought in World War 2 and brought home brides who became dedicated Metisians.

Metis also became the summer home of another war bride, when summer resident Major Edward Cousins Hague, married his sweetheart, Joan.  Edward Hague (1902-1997), son of Henry John Hague (a long-time summer Metisian) and brother of Harry, who also served.  After being blown out of the Naval College window in Halifax during the 1917 Explosion, Edward Hague went to McGill and became an electrical engineer.  When World War 2 broke out, he joined up with the Artillery.

He spent his service in England, working on highly classified secret weapons projects and range finding/radar equipment.  He sustained a “war injury” when he hurt his back in a jeep accident during manoeuvres on Salisbury Plain, which was used for military training including troop preparation for the invasion of Europe.  One year, Edward went to a Christmas party thrown by the locals for the Canadians away from home, and met what his daughter later would describe as “an enchanting woman, Joan Kitching”.  The two were married in England and she came to Canada on a “brides’ boat”, the Mauretania.  Says daughter Nora Hague, who remains a staunch summer Metisian, “If there hadn’t been a war, they would never have met; I’m a true war-baby.”  Her mother is on the far right below.

Were There War Grooms?

While some remember the post-war comedy “I Was a Male War Bride” starring Carey Grant, it’s likely that most would prefer the title ‘war groom’ and yes, in Canada, at the very least there were 45, whose stories are told in Judy Koczar’s Canada’s War Grooms and the Girls who Stole their Hearts.  There likely were many more, mostly aircrew trainees or operational staff who came to Canada during World War II as part of the British Commonwealth Air Training Plan.

One nearby Lower Saint Lawrence war groom was Gerry Burnett, born in Wisconsin to a French mother and British father.  He moved to England and in World War 2 became an Air Transport Auxiliary (ATA) pilot.  He and fellow ATA pilot – Matanaise Elspeth Russell – married in England and came to Canada in 1946.  The two began their own air service.

Although some might quibble that the later-in-life marriage of a former British pilot to a widow from Metis’s multi-generational MacDougall clan doesn’t really count, we beg to differ.  On the summer resident side, Brit Anthony (Tony) Bethell met and married the widowed Lorna MacDougall (McMaster) Bethell in 1970.  Tony’s Second World War experience (link), which included being shot down in Europe and then surviving a prisoner-of-war camp and what is known as the Great Escape, left an indelible mark on him; Lorna Bethell describes Tony’s part in the Great Escape (link), which contrasted with her own happier experience in World War 2 (link). 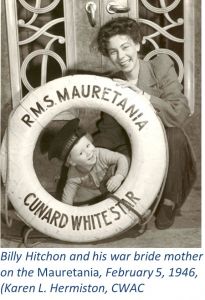 Did you know… ?  “Temptation and vice were among the first problems with which Canadian military authorities had to contend when the first contingent arrived in England… Enticed by locals offering to buy them drinks, and with a surplus of English pubs, reports of the Canadians’ liquor-fuelled antics became increasingly common, with one soldier writing home that “[our men] were constantly getting into trouble and excuses had to be made for them all the time.” … Government and military officials worried that Canadian soldiers, under the influence of alcohol, were being victimized by loose and immoral English women… ”  So reported Sarah Cozzi in “When You’re A Long, Long Way From Home”: The Establishment of Canadian-Only Social Clubs for CEF Soldiers in London, 1915–1919” (Canadian Military History: Vol. 20: Issue 1, Article 5, April 30, 2012). 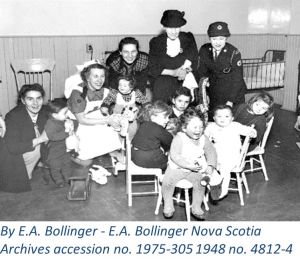 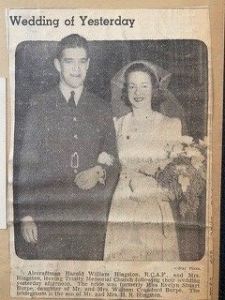 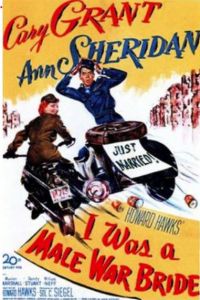 Memorable Quotes from “I was a Male War Bride”

Capt. Henri Rochard: My name is Rochard. You’ll think I’m a bride but actually I’m a husband. There’ll be a moment or two of confusion but, if we all keep our heads, everything will be fine.

Sergeant: Any female trouble?
Capt. Henri Rochard: Nothing but, Sergeant.

Capt. Henri Rochard: I am an alien spouse of female military personnel en route to the United States under public law 271 of the Congress.

Did you know… ?  Others coming through Pier 21 included:

Most of the more than 90,000 aviators who came to Canada as part of the BCATP or British Commonwealth Air Training Plan (including almost certainly some who ended up at No. 9 Bombing and Gunnery School at Mont-Joli).

More than 2,000 children evacuated from the United Kingdom to escape the Blitz.

Winston Churchill, who passed through Pier 21 four times during the Second World War, traveling in 1943 to the Quebec Conference and the following year to the Washington Conference. During the latter trip, he reportedly led a sing-along of “O Canada” and “The Maple Leaf Forever” at the Pier 21 railway platform where hundreds had gathered to see him.

Huge amounts of gold (including, in Operation Fish, the UK’s entire gold reserve – USD 2.5 billion sent – reported as “fish” on the ships’ manifest) sent to the Bank of Canada in Ottawa for safekeeping (British securities went to Sun Life headquarters in Montreal). The central banks of Belgium, the Netherlands, France, Norway and Poland also “availed themselves of this unique type of Canadian wartime hospitality,” with only small handling charges being the only revenue to Canada for the service.