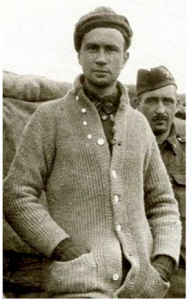 Guy Drummond, the only son of Julia Drummond, was named lieutenant in the 5th Regiment of the Royal Highlanders of Canada (Black Watch) in 1912, rising to captain in 1914.

The son of rich Montreal parents, the bilingual Drummond graduated from McGill in 1909, and an early 1900s article said:  “He was modesty personified. He used to wear an old grey suit, and he had no airs or manners or habits such as we are accustomed to associate with the idle rich.”

He accepted a demotion, when the First World War broke out, so that he could serve on the European front.  His regiment was sent to Belgium to support allied forces near Ypres and he was in the trenches at Passchendaele. On April 22, 1915, the Germans launched a major gas attack. While trying to rally the troops, he was shot in the neck and died in what became known as the Second Battle of Ypres (April 22 – May 25, 1915).  This was the first mass use of gas by the Germans, and was ultimately the first time a former colonial force (the 1st Canadian Division) defeated a European power in Europe.

Colonel John Allister “Jack” Currie wrote the following of two under his command, Captain Warren being Drummond’s brother-in-law who had died two days earlier and whose burial Drummond helped arrange and attended the day he died:

“The whole Empire did not possess two kinder or braver men than Captains Darling [also killed in action] and Warren [Drummond’s brother-in-law]. It is only when men go down into the valley of the shadow of death together that they learn to appreciate each other. In the trenches, soldiers are true comrades, backbiting, lying and slandering is left to the slackers and “tin soldiers” who stay at home. Both these young men were in the flower of their youth, both left young wives, both were men of means, brought up amidst wealth and refinement. They gave up a good deal to go to the war, and their example and their lives should fix a tradition not only for their fellow officers of “The Red Watch” but also for the whole Canadian Army. They did not hesitate to “take their place in the ranks, “and they died like the heroes of Marathon and Salamis.”

“No braver lad, no more ardent Highlander ever donned the tartan of the Black Watch than Lieutenant Guy Drummond.  When he fell Canada lost a valuable and useful citizen.  His training, education and charm of manner, coupled with his intense patriotism, marked him for a great career.  Major Norsworthy, his friend and comrade, fell by his side. “