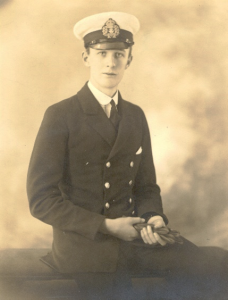 John Henry Gordon Bovey (D.S.C., C.D., R.C.N.), son of then Lt.-Colonel Wilfrid Bovey, was born in London in 1916 while his father served in France during the First World War.

In 1935, John joined the Marine Section of the Royal Canadian Mounted Police (RCMP) as a midshipman, and later switched to the Royal Canadian Naval Volunteer Reserve (RCNVR), created after the First World War.  The RCNVR became known informally as the “Wavy Navy” because of the wavy gold stripes on the officer uniform cuffs, in contrast with naval officers’ straight lines, with its own tongue-in-cheek song.  RCNVR members had to have a maritime job and professional knowledge of ships and the sea.  There were a maximum of 1,500 RCNVR members between wars.

At the outbreak of World War II, John Bovey was called up to serve on several ships that performed Atlantic convoy escort duties protecting groups of ships that crossed the Atlantic to supply European allies.  In 1940, he married the daughter of Maj. Gen. William H.P. Elkins, CB, CBE, DSO, who also summered in Metis, but had little time to spend with his new wife.  Convoys would form up in the Saint Lawrence, some off the Metis shore, as remembered by Lorna Bethell.  For many of the newly built warships, the only experienced officer available was often the captain, a member of the RCNVR – a merchant marine officer in civilian life – whose knowledge of naval operations relied on courses and some service in small coastal or harbour defense vessels.

Did you know… ? Once during a quiet moment, while waiting for ships to collect for a convoy, John Bovey came ashore near Boule Rock near the then Seaside Hotel.  With a few officers, they enjoyed tea with strawberries and cream!  And here’s another good story about John from someone who served under John that shows John’s management style.


Tales of support from home… Read a poem from John Bovey’s mother to him while he served at sea, reminding him that Metis was waiting for him.

Learn more… By war’s end, Canada’s navy was ranked third largest in the world, with 100,000 men and women, most from the RCNVR.  For a sense of what it was like for the Navy and RCNVR during, watch this 44-minute National Film Board of Canada publicity movie.  https://www.nfb.ca/film/action_stations/