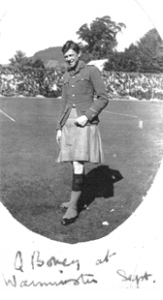 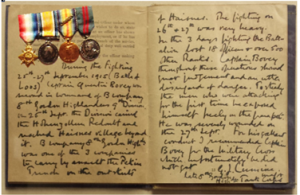 Quentin Bovey was commissioned in the Royal Highlanders of Canada in February 1913.  As he was studying in England when the war began the following year, he enlisted there on September 7, 1914 at age 18, and was assigned to the 18th Gordon Highlanders.  He was given a sword as part of his uniform.  He said the only time he had to use it was when, as part of his first duty to bring 200 new recruits from Scotland to London, he had to get the men out of the pub near whatever stations the train stopped at along the way.  He said the sword came in handy then, and when he arrived in London, he found he had 201 soldiers!

Another story he told was that while studying in England he had played hockey on a team that included an American, last name of Le Cron.  As an American, Le Cron was not much affected by the build up to the war and went to Germany.  After the war had started, Le Cron realized the error of his thinking and sought to make his way back to England.  One dark night in Belgium or Holland, he was stopped by a British patrol – “Halt who goes there, and what is the password?” Le Cron shuddered, thinking he would be shot as an enemy.  All of a sudden, a voice said: “Le Cron, is that you?”  Le Cron had had the amazing luck to have been stopped by one of his former hockey teammates from school in England.

Apart from these stories, Quentin never talked about his experiences during the early years of the war.  After his death, among the papers of his sister, Jean Bovey, was found a copy of his military Service Book.  It showed he had been wounded September 27, 1915, after being promoted to Captain in July.  He had been shot in the knee and abdomen, losing a kidney, and was found half a day after he had fallen.  He spent six months in hospital in England and another six in a convalescent home.  In September 1916, he was attached to General Staff, Eastern Command Headquarters and, in June 2018, was assigned as aide de camp to General Sir William Robertson, who had served as Chief of the Imperial General Staff – the professional head of the British Army – from 1916 to 1918 and in June 1918 been promoted to General Officer Commanding-in-Chief for Home Forces.

Mention in Despatches in the Gazette of January lst, 1916:

“During the fighting 25th to 27th September 1915 (Battle of Loos) Captain Quentin Bovey was second in command of B company 8th Gordon Highlanders, 9th Division. On the 25th September the Division carried the Hohenzollern Redoubt and reached Haisnes village beyond it. B Company 8th Gordon Highlanders was one of the 3 companies to carry by assault the Pekin Trench on the outskirts of Haisnes.  The fighting on the 26th and 27th was very heavy. In the three days fighting the Battalion lost 18 officers and over 500 other ranks.

Captain Bovey throughout these operations showed great judgement and utter disregard of danger. To steady the men who were attacking for the first time, he exposed himself freely on the parapet. He was seriously wounded on the 27th September. For his gallant conduct, I recommended Captain Bovey for the Military Cross, which unfortunately he did not get”. Signed by G.D. Cumine, Major Tank Corps, late Gordon Highlanders.

Later comments in the Service Book:

“Whilst attached to the General Staff of the Eastern Command showed plenty of initiative and good power of organization. He proved himself to be a valuable officer.

In the General’s handwriting: “I hope you will let me know from time to time what you are doing. I am very much obliged for all you did for me and miss you a great deal, signed by General Sir William Robertson.”